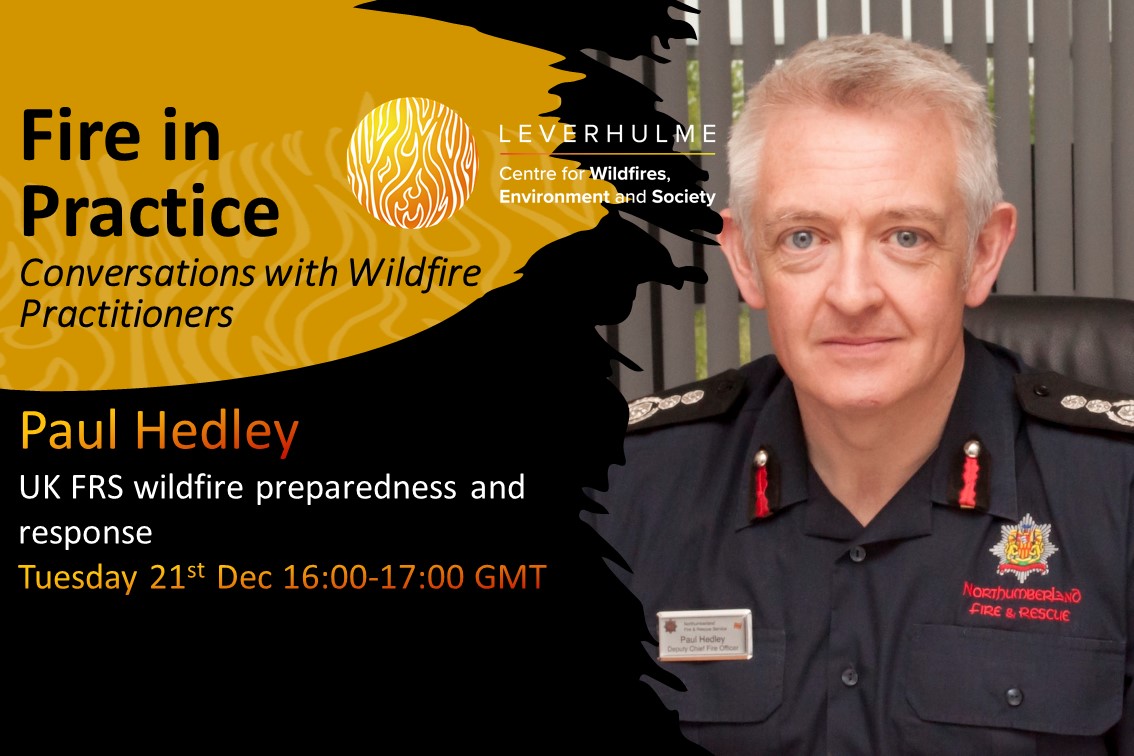 In our latest Fire in Practice seminar, Chief Fire Officer Paul Hedley (Northumberland FRS) talks about FRS response to wildfire in the UK

Paul has been involved with wildfire development within Northumberland Fire and Rescue Service (NFRS) since 2005/6 when he implemented a strategic review of the service’s response to wildfire / large rural fire events. The review led to NFRS developing a comprehensive three stage wildfire training programme and a transformation of NFRSs approach to dealing with wildfire incidents. The NFRS wildfire training system has now been delivered to approx. 60 UK and international FRS and partners.

Paul held the interim chairmanship of the England and Wales Wildfire Forum from February 2009 until December 2010. In August 2011, he established the NFCC (then CFOA) Wildfire Group in order to raise the awareness of risks and dangers of Wildfire incidents within the UK FRS community and improve wildfire pre-planning, prevention and response.

As NFCC wildfire lead, Paul was involved in the consultation leading to ‘severe wildfires’ being added to the National Risk Register for Civil Emergencies in 2013 and 2015.

In order to provide resilience support to UK FRS dealing with significant or protracted wildfires within their areas, Paul led the introduction of a national Wildfire Tactical Advisor (WTA) capability aligned to National Resilience. The first deployment of the capability took place when WTA support was provided to Greater Manchester FRS and Lancashire FRS at the Saddleworth and Winter Hill wildfires of 2018.

Paul has been involved in a number international wildfire projects including EUFOFINET, and worked with the National Fire Protection Association (NFPA) and International Association of Fire Chiefs (IAFC) to develop a tripartite MoU for the sharing of NFPA wildfire communicate education programmes for adoption within a UK environment.

The Fire in Practice – Conversations with Wildfire Practitioners seminar series, organised by the Leverhulme Centre for Wildfires, Environment and Society, aims to explore the developments and challenges in the ‘real world’ of landscape fire, reflecting on the role and opportunities of research in addressing the issues. The seminars will be held every two months (usually the last Tuesday of the month), and are free and open to all interested audiences. Each seminar involves 30-40min of a guest speaker presentation, followed by opportunity for Q&A and discussion.

Once you have registered, you will receive a joining link closer to the event.

The Leverhulme Centre for Wildfires, Environment and Society is a collaboration between Imperial College London, King’s College London, Royal Holloway, and the University of Reading.