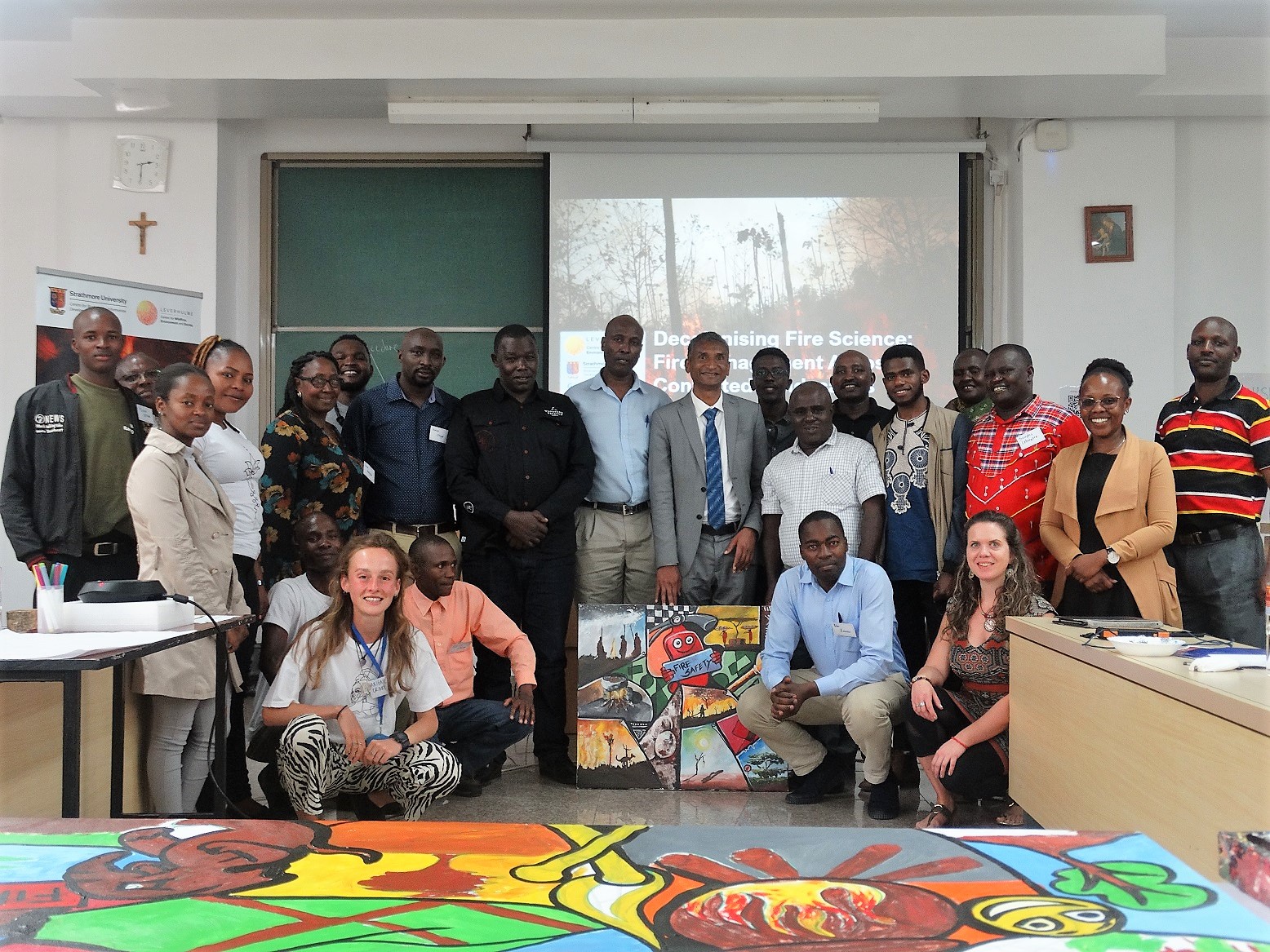 [The full workshop report will be available, in English and Swahili, in the New Year. This summary is also available in Swahili]

In many parts of the world, colonially derived anti-fire narratives, such as the belief that indigenous peoples and local communities burn indiscriminately, continue to inform conservation strategies. This is particularly true in protected areas in fire-prone landscapes , where fire suppression policies and the exclusion of peoples and livestock have redefined fire management systems and altered the dominant fire regime. This serves to maintain the ‘wildfire paradox’, resulting in widespread ecosystem degradation, biodiversity loss, and social-economic vulnerabilities.

The persistence of fire suppression policies in environmental management systems worldwide, particularly in settler colonies and historically colonised nation states, not only drives ecological degradation, but also represents deeper challenges related to social-ecological injustices, subjugation, and the excludability of natural resources. However, we know that indigenous peoples comprise less than 5% of the world’s population yet manage 25% of the Earth’s surface and protect more than 80% of the remaining biodiversity. They are the greatest environmental stewards on the planet.

On 1st and 2nd Dec 2022, 25 natural resources practitioners, rightsholders, and researchers from across Kenya came together at Strathmore University in Nairobi for a workshop to explore decolonising fire management practices and what is needed for fire management in a Kenyan context.  The workshop was organised by Leverhulme Wildfires EDI Working Group as part of its Decolonising Fire Science programme, in collaboration with the Centre of Biodiversity Information Development, Strathmore University, with support from the Grantham Institute – Climate Change and the Environment. Members of Leverhulme Wildfires, who met together at Royal Holloway in London for a parallel workshop, joined the workshop virtually, allowing exchange of ideas and knowledge between Kenyan and UK-based participants.

The workshop, which aimed to provide a flexible and adaptable model that can be applied across diverse and contested landscapes, involved a range of methods to explore ideas and perspectives, including rich picture, world café, participatory art and participatory video, live art, presentations, and the development of a Joint Declaration. Whilst the full report, available in early 2023, will provide an in-depth analysis of the workshop discussions, here we summarise the key approaches and share some of the resources and outputs that are immediately available.

What does fire mean to you?

After setting the context for the workshop and background to decolonising of fire science, we explored the broad question of ‘what does fire mean to you?’, using a rich picture approach. Participants came together in groups to draw what they felt was important about fire, and the meaning of fire in their landscape, then shared and discussed the images with the whole group. This revealed perspectives both about the negative impacts of wildfire on the landscape, including threat to wildlife, as well as some of the potential positive aspects, such as vegetation regeneration. 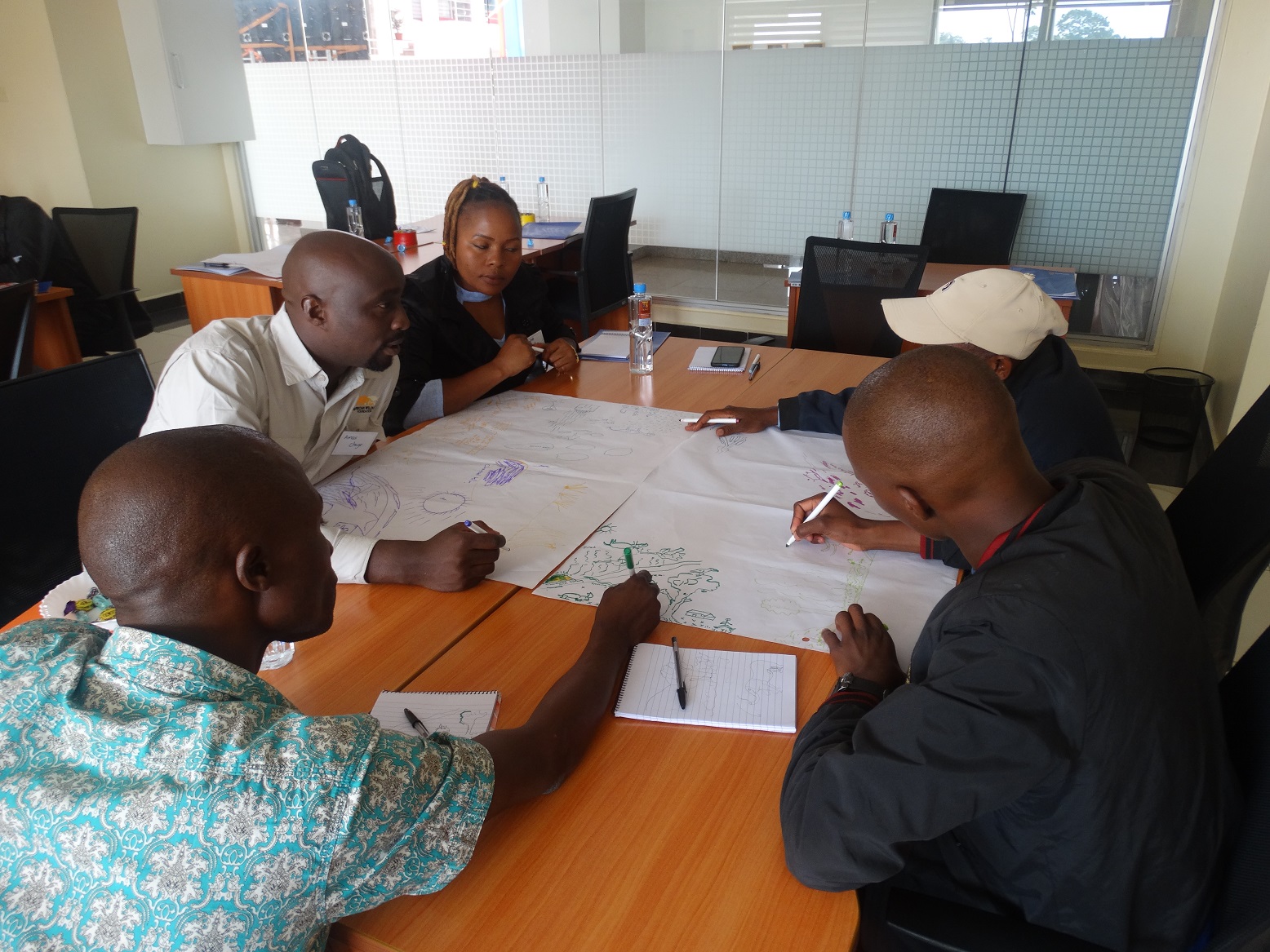 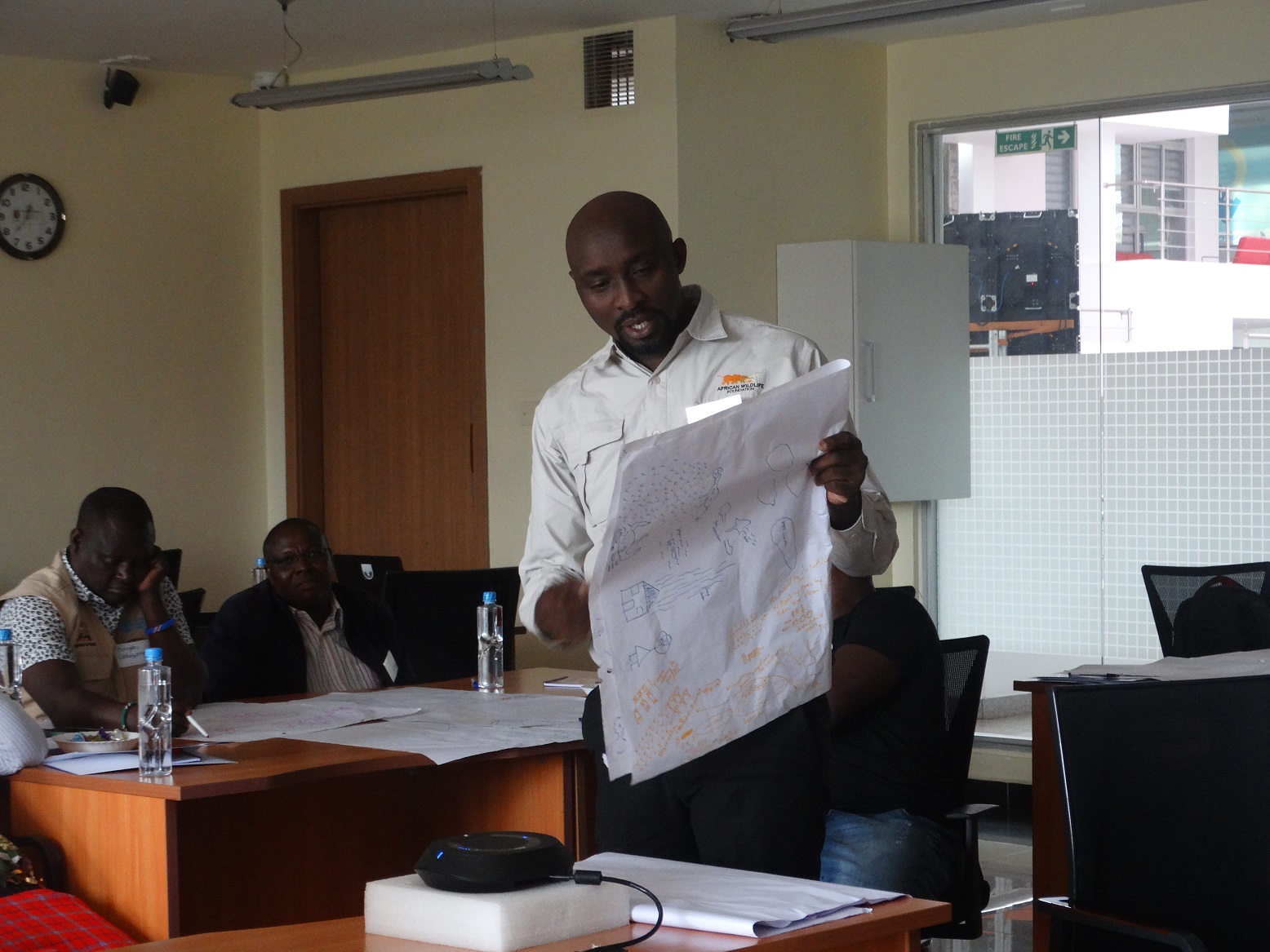 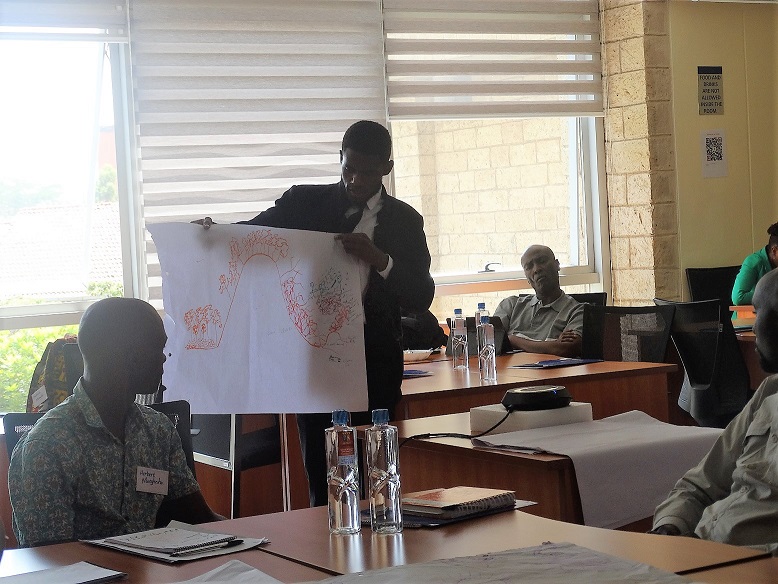 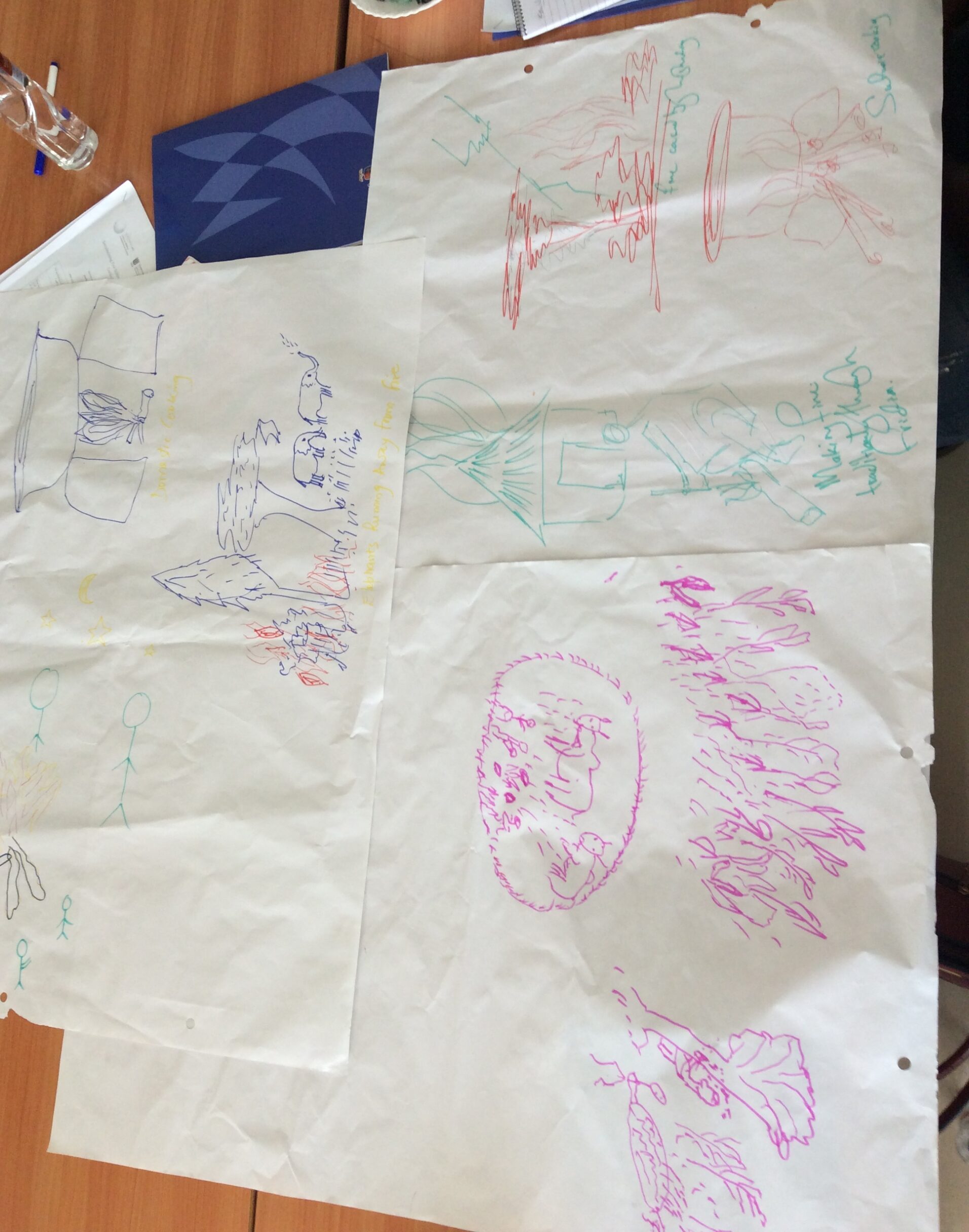 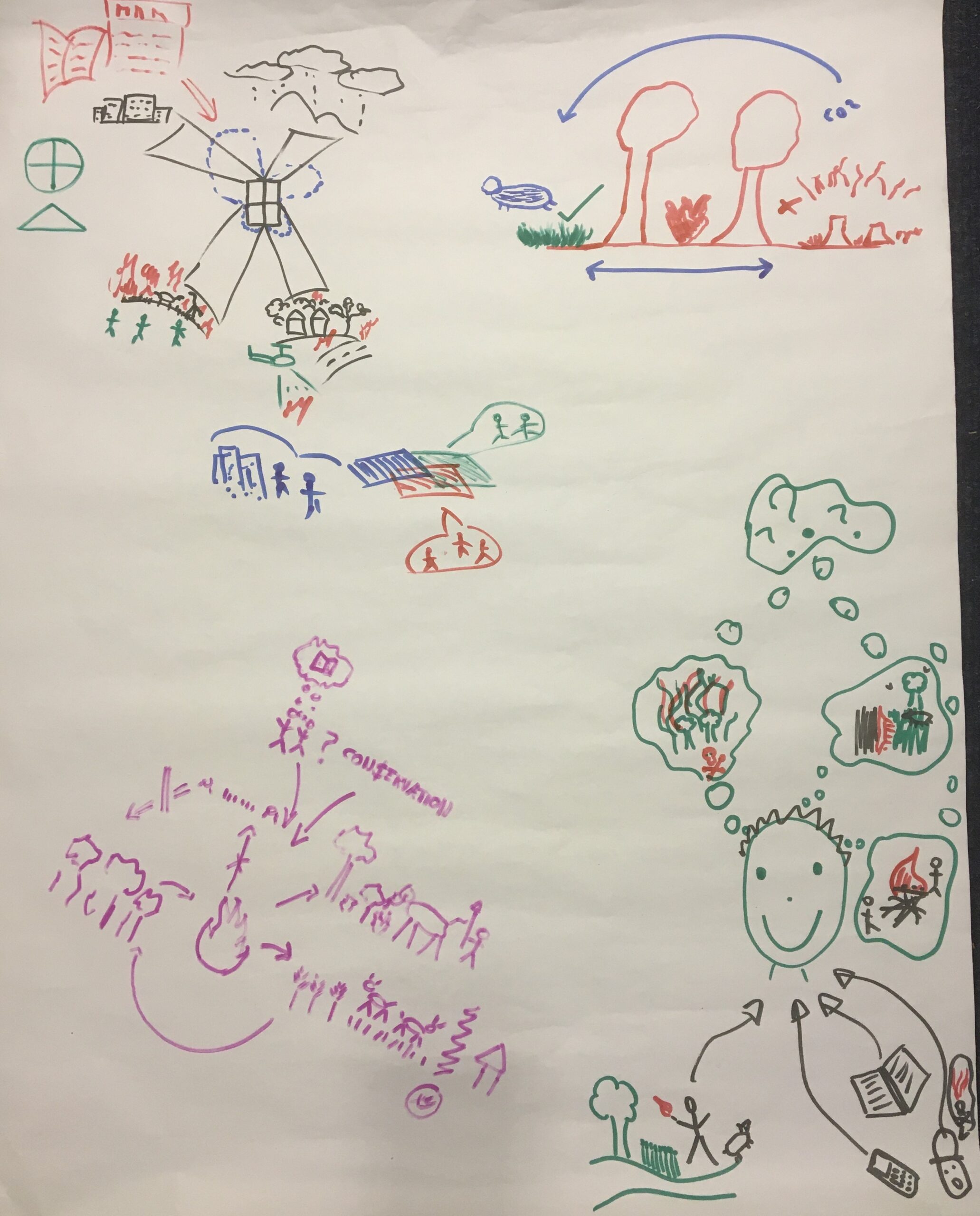 To delve more deeply into the complexities of fire governance, including equitability and decolonising fire management, we used a ‘world café’ approach whereby participants commented on a number of questions, moving from table to table to add in further comments to those already shared. We explored together the questions of ‘how is fire governed across your landscape?’, ‘what do you want to change about fire management’,  ‘what are the challenges preventing local community involvement in fire governance?’, ‘what are the national and regional barriers to fire management? (e.g. social, economic, political, legal)?’ and finally, ‘what can be done to facilitate equitable fire governance and management?’ (see below). We discussed individuals’ responses and why they responded this way – for example on the role of carbon credit schemes in local wildfire management (e.g., REDD+), and the differences in‘traditional knowledge’ between the younger and older generations in the room, and how this impacted individuals’ responses. 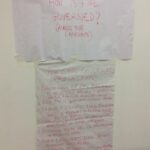 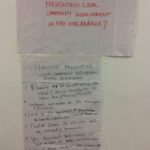 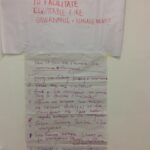 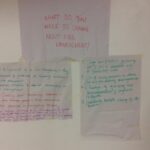 We also used a collaborative exercise for mapping the relationships between the different workshop participants’ roles or organisations, with the projects they are involved with, the stakeholders they work with, and anyone excluded from those projects. 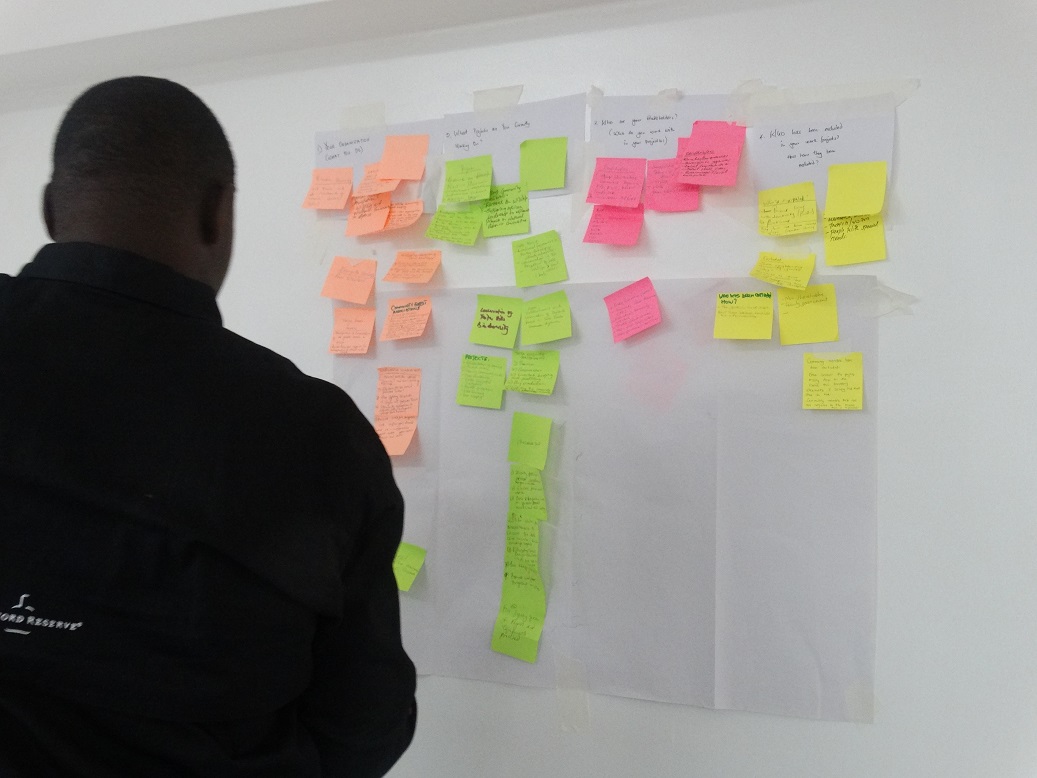 Recognising the power and ability of art to reflect and challenge narratives and ideas, and linking with our work on Wildfires at the Art-Science Interface,  we invited artist Shedrack Musyoki to collaborate in the workshop. Shedrack is a fine artist based in Nakuru in Kenya, who often uses participatory murals as a way of bringing people together to share stories. Shedrack initially presented a sculpture, titled Makazi (meaning ‘Home’) reflecting the impact of wildfire on nature, and then over the course of the workshop (and after), developed three pieces commissioned as part of the project – a live piece titled ‘Mamboleo’ (meaning ‘Current Affairs’) based on his take on the discussions that he heard in the workshop, a summary piece based on his reflections after the workshop had finished titled Chaguo Ni Letu (meaning ‘The Choice Is Ours’), and a participatory mural titled ‘Mwaki’ (meaning ‘Fire’ in the Kamba community), in which he used pictures that were created during the rich picture session as a basis for the mural, which everyone then (enthusiastically!) participated in completing (full images and reflection of the artworks will be presented as part of the full report). Leveraging art in this way proved an innovative way to engage and reflect on the topics from the workshop, and will also be a valuable way of communicating the workshop findings with the wider public next year. 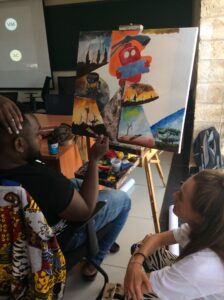 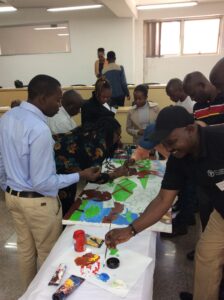 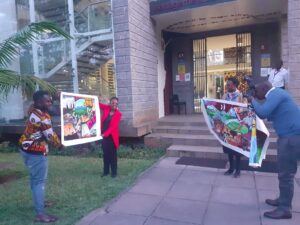 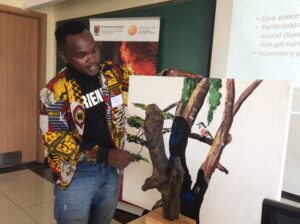 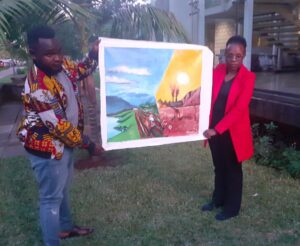 Whilst the group in Nairobi worked on the world café questions, the participants at Royal Holloway adapted a participatory video method to create two videos reflecting on decolonisation of fire science, their own research practices, and their thoughts on what they had heard so far during the workshop. They highlight the importance and power of agency that people have, particularly through participatory methodologies, in making their own decisions around fire governance, but also the agency of researchers and their own implicit biases that may be shaped by colonial frameworks or legacies.  The issue of underrepresentation of some regions of the world in collecting physical data was also raised, for example emissions data for fire modelling, and the need to address these gaps.

The second participatory video posed a number of questions for further deliberation – including what goals do the current legal systems relating to fire lean towards and who is most represented in those goals?; what do different groups want from the landscape,  and how do different fire regimes support those different goals?; what fire regimes do we see from the existing legal and human perspectives of use of fire (do they match up with the historical aspect of fire in the landscape? do they provide fire that’s needed to keep the vegetation at a certain state; does climate change need to be considered for fire management in the future?); how can the distribution of different benefits and costs,  amongst different uses and fire management regimes, be dealt with?; and finally, what would a just fire regime look like? At the same time, at the parallel workshop at Royal Holloway, members of Leverhulme Wildfires were developing a Joint Declaration of their own, for pioneering more equitable ways of making fire knowledge, which will be written up as a formal declaration for the Centre.

The Joint Declarations are the beginning of a journey and commitment to more effective and equitable fire management in Kenya, and more equitable fire science respectively, which will require continued and renewed efforts by all parties, both within the workshop and beyond, for the goals to met.

On the first day of the workshop, we had a number of presentations to help set the context of the workshop, including an overview of African Fire Regimes by Prof Sally Archibald (University of Witwatersrand), the history of Fire Management in Kruger National Park by Terica Strydom (South African National Parks) and the Wildfire Paradox by Abi Croker (Imperial College London). This was then followed by mini-presentations from members of Leverhulme Wildfires on fire management challenges in other parts of the world, providing global context to the issues. On the second day, we also had an interview with Harry Wright, and environmental lawyer and founder of Bright Tide, on how to influence policy and develop a white paper (summary here). The pre-recorded presentations are available to view below, whilst the live presentations recorded during the workshop will be shared in the new year.

Thank you to all the participants of the workshop for their time, enthusiasm and sharing of their knowledge and ideas, to BID-C for the hosting, co-convening and organisation, and to Leverhulme Wildfires and Grantham Institute for funding the workshop.