Fire suppression policy legacy, human settlement, and human-driven climate change have been enhancing fire activity worldwide. The budgetary constraints have gradually pushed many governments away from proactivity to reactivity, prioritising fire suppression over fire prevention (Schoennagel et al. 2017; Roos et al. 2020). This distortion of management priorities is foreseen to increase with the further extension of residential development to rural areas, since more homes and businesses will face the threat of wildfires. An efficient wildland policy development requires an active commitment from governments at different levels and a complete understanding of the underlying reasons behind fire occurrence. Political incentives can play significant roles in influencing wildfire occurrences, through the promotion of effective fire prevention and adaptation strategies.

The research aims to empirically analyse the relation among elections, party affiliation, jurisdictional borders, and wildfire occurrence. Specifically, the study is going to deal with the following questions:

❑ Does partisan affiliation of the government affect wildfire occurrence?

❑ Is the frequency of wildfire in the hinterland and at the jurisdictional borders of a state similar?

The US will be used as a case study and the scope will be expanded to the European context.

The term political business cycle (PBC) describes the fluctuations of economic outcomes that results from an external intervention of political actors. Existing literature has shown that before elections, inflation rates and public spending tend to be higher (Nordhaus, 1975, Alesina and Roubini 1992). Since the environment is a public good and its management is dependent on policy, electoral cycles analysis has been applied to different environmental policies and outcomes: ❑ In Greece, patterns compatible with the presence of electoral cycles suggest that the effort is shifted away from wildfire prevention measures in the years before the election. (Christodoulakis and Skouras, 2011; Kountouris, 2020).

❑The opportunistic behaviour: incumbent governments will create a transitory economic expansion in order to boost their chances of re-election (Persson and Tabellini, 1990),

❑The partisan behaviour: is based on the assumption of affiliation, for which different political parties apply policies that favour their supporting groups (Alesina, 1987).

The behavioural studies have been recently applied to the adoption of favourable environmental policies, especially regarding Greenhouse gasses emissions, climate change, land-use change, and deforestation. However, research on the partisanship influencing the promotion of sustainable wildland management are still scarce.

Pigou (1920) introduced the concept of negative environmental externality, describing the canonical example of the: “uncompensated damage done to surrounding woods by sparks from railway engines”. The theory of externality states that at political boundaries, local leaders have weak incentives to reduce polluting activity because the social costs are borne by the neighbouring states. Several empirical studies have documented significant free riding along interjurisdictional river boundaries (Sigman 2002, 2005; Sandler 2006). Although fires pay no attention to jurisdictional boundaries, socio-political frontiers can affect politicians’ incentives and priorities in the management of biodiversity and ecosystems. 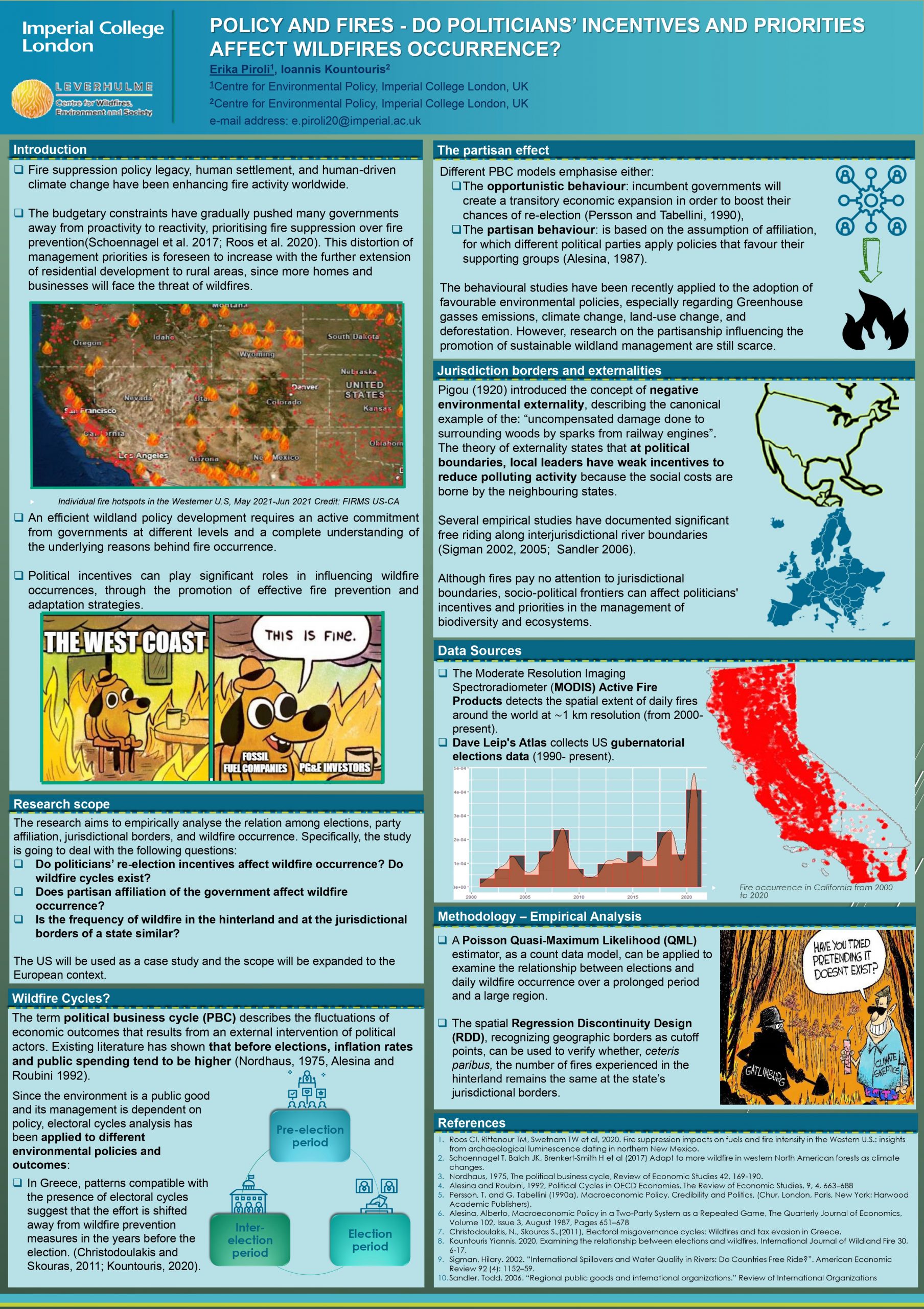