Working in partnership to reduce the threat of wildfire in Scotland 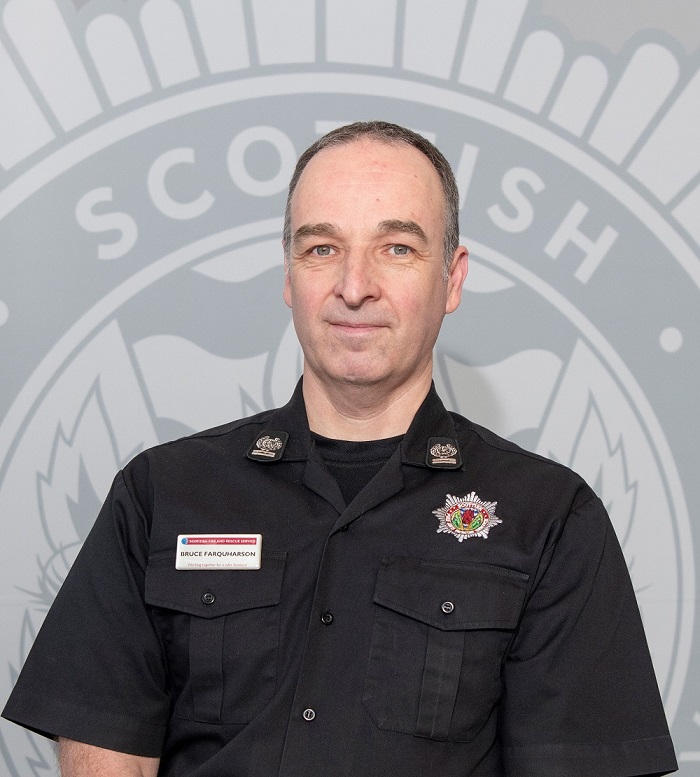 Scotland may be the most northern part of the UK, but with wildfires increasing in frequency and intensity at higher latitudes, a considerable and growing threat exists. To find out more about the work Scotland is doing reduce this threat of wildfires, we spoke to Bruce Farquharson, Deputy Assistant Chief Officer in charge of the Scottish Fire and Rescue Service’s Training Department. Bruce has responsibility for the Service’s Wildfire Capability, which involves developing and maintaining the wildfire prevention and response strategy, and as the Chair of the Scottish Wildfire Forum, he works with a diverse range of partners to develop a common understanding and agenda for all of the agencies involved in wildfire prevention and response. Bruce has been in the Fire Service for 29 years and has had experience in a number of different departments in his career.

Adriana: There is evidence that climate change is increasing the risk of wildfires in the UK, and we are also seeing more frequent and more intense wildfires at higher latitudes, such as in Sweden and Siberia. How much of a problem do you think wildfires are in Scotland? And what characterises them?

Bruce: Wildfire in Scotland is definitely a growing challenge. We have had fires in Scotland for as long as we can remember, but the combination of an increasing fuel load, climate change and the rise in popularity of people having staycations and exploring the countryside is raising the threat of fires. So far in Scotland, wildfires tend to be started by humans, particularly by people that are not used to going into the countryside and might not understand the risks.

Unfortunately, when we do get fires, we are also seeing a trend that they are becoming larger, more intense, and more difficult to deal with. You mentioned the fires in the Arctic region – the scale of the fires they are experiencing there is unprecedented, and in Scotland we are experiencing, to a lesser extent, a comparison to that.

Scotland has an abundance of vegetation types that will allow fire to spread easily along the surface such as grass, heather, gorse and so on, but we also have large areas of woodland that are increasingly becoming involved in fire. Wildfires rarely start in a woodland in Scotland, but they will travel into a woodland, and when they do it’s a significant challenge for firefighters to deal with, especially if it becomes intense enough to cause the trees to catch fire. In 2019 we saw a crown fire which is almost unheard of in Scotland and quite extreme.

We hope that by having a realistic, pragmatic but cautious approach to fuel management that we can protect our woodlands and peatlands from wildfire, and that may involve fire as a management tool.

The other issue that we have is our peatlands which are very susceptible to fire. If the fire gets into the peat, it can be extremely difficult to extinguish. It also causes significant carbon release, and it can be hugely detrimental to the local environment for decades, if not centuries, to come. We can see scars from peat fires lasting for generations. Therefore, we go to great pains to reduce the opportunity of wildfire to spread into our peatlands.

A way of doing that is to burn off the readily available fuel on the surface in a very controlled, quick fire that doesn’t penetrate into the peat. A wildfire on the other hand has much higher temperatures, is much more intense, and creates much more opportunity for the peat to become involved. We hope that by having a realistic, pragmatic but cautious approach to fuel management that we can protect our woodlands and peatlands from wildfire, and that may involve fire as a management tool.

Adriana: And how are you detecting the peat fires, given they are usually smouldering without visible flames?

Bruce: Generally, if there’s a fire that involves peat, then there’s been a large fire that has been very visible preceding it. A peat fire wouldn’t just happen spontaneously, and generally it will have been caused by something quite large.

There are different phases of wildfire management – the attack, containment and mop-up. The mop-up becomes much more of a priority with peatlands, and we use the Fire Danger Warnings to help us understand where we should put more or less attention in relation to those three phases of a fire. If peatland is involved, the mop-up will take an awful long time, and the Fire Service, who whoever manages that land, will continue to visit a site for weeks just to see if there’s an indication that there’s still a fire happening. A smouldering fire can travel quite long distances underground, and there may be no visible indication on the surface that there’s a fire burning underneath, until it hits a tree root or pocket of less dense material where it might flare up. It’s a very difficult fire to deal with. 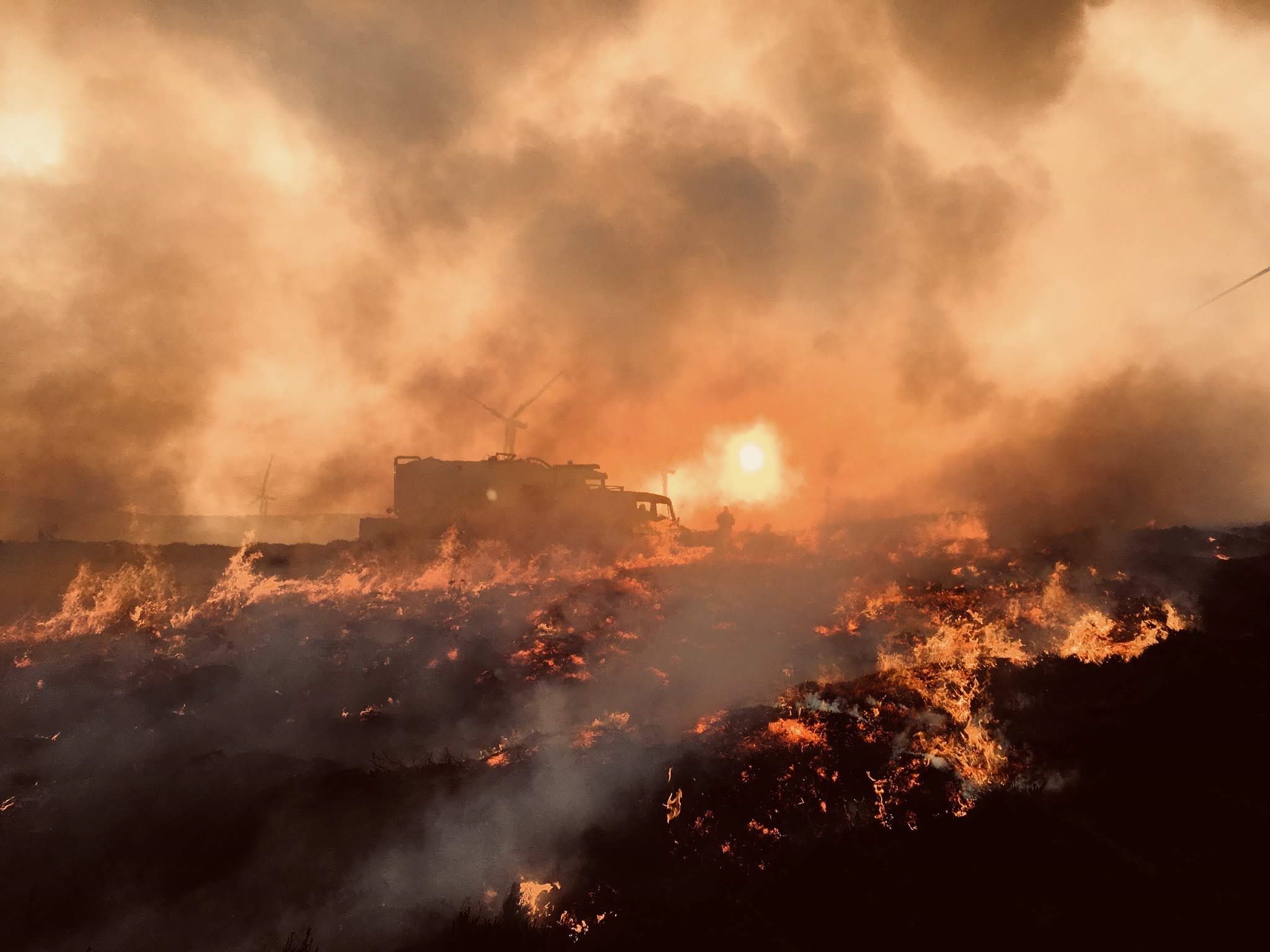 Adriana: What do you think are the other biggest challenges, or what are your greatest concerns, for wildfire management in Scotland?

Bruce: We are working hard to incorporate wildfire mitigation into land management thinking, and into public awareness initiatives, but there are a number of challenges around this. We have an ongoing debate in Scotland about the use of fire as a land management tool, and the difference in practice by those that do so. This often emotive subject has the potential to distract from the wildfire prevention and mitigation benefits that this practice can bring, and focus more on the perceived negatives. There are two other key methods to manage fuel including cutting or swiping to remove the fuel, and using herds of deer or sheep, but there’s also challenges with both of these.

once you find common ground and take away the emotive language, you can actually get some real progress

My greatest concern is that this polarising debate prevents true joined up thinking and the opportunities to build resilience into the Scottish landscape that are needed, and that all the while we are seeing an increasing fuel load and the conditions that favour fires becoming more and more common. We are trying to find that common ground, and actually it’s quite easy to identify, which is we all just want the best for the Scottish environment and countryside and to maintain its natural beauty, and once you find common ground and take away the emotive language, you can actually get some real progress. My biggest concern is a perpetual debate where we focus on our differences, rather than on where we agree.

Adriana: Tell me about the Scottish Wildfire Forum – what is its role, who is involved, and how is it helping with wildfire management?

Bruce: The Scottish Wildfire Forum was formed in 2004 and brings together key partners all working on producing good quality information for wildfire prevention, either by tailored messaging for land management, public communications, or assisting with Government level work on important subjects such as the Scottish Risk Assessment.

Although the group is chaired by the Scottish Fire and Rescue Service it is based upon a partnership approach taking into account the perspectives and priorities of a range of agencies and groups to make sure we have a balanced and fair approach to our work. Our members range from government agencies, such as NatureScot and Scottish Forestry, to national unions such as the National Farmers Union, local authorities, landowners, environmental agencies and groups of interests, so a broad range of views.

That’s one of the strengths of the forum, we have such an eclectic mix of people but all who are impacted by the threat of wildfires. We’ve been able to, very usefully, identify common ground, and as I said earlier, this is so important. We are all here to achieve the same thing, and even if we have different opinions on how to achieve it, we all agree to all forward together.

As a result of this, we’ve been able to make significant progress in getting our messaging out to the public in the last few years and pushing on the agenda of wildfire. Lots of people are now talking about wildfire, which is creating its own momentum, and the Scottish Wildfire Forum can provide good quality information and consistency to the rhetoric.

Adriana: You have been involved in the development of the Scottish Fire Danger Rating System (SFDRS), led by the James Hutton Institute. Can you tell us a little about this, and the benefits of the project?

Bruce: This important piece of work was funded by Scottish Government and sought to take the Canadian Fire Danger Rating System that we currently use and adapt it to be more accurate for the UK context. The Canadian system was developed using thousands of test burns of the vegetation found in Canada, and the vegetation types in the UK are different and as such will give different results, so we really need to have something that gives a specific output based upon our situation.

The James Hutten Institute project involved other researchers including from the University of Edinburgh and formed the foundation for further research to be carried out to ultimately reach a UK Fire Danger Rating System – so it was extended beyond just Scotland. The work also linked closely and fed into the work being led by the University of Manchester funded by NERC on the same topic to make sure that the same work wasn’t simply being replicated and that we developed synergy and collaboration between the two pieces of research.

It has been great to see wildfire research coming in, providing an evidence-based approach, whilst at the same time building good synergies and relationships. We work closely in everything we’re doing in wildfire to try to take a UK approach, so I work closely with the England and Wales Wildfire Forum and National Fire Chiefs Council for example.

Adriana: What other tools or knowledge gaps do you think researchers and academics could help with in Scotland, in relation to wildfires?

Bruce: We are continually looking for an insight into where, when and why fires happen, any patterns in human behaviours or landscape management that contribute to fire starting or spreading. There’s a real need to have good quality research into how to create a resilient landscape, and what a ‘resilient landscape’ even means.

It would also be really useful to have research into the restrictions in place for Muirburn code (on good practice guidance for burning and cutting of vegetation) on peat of a specific depth, or slopes of specific steepness. These restrictions cause some real challenges and seem to have evolved with a lack of any real science behind them, so some good empirical data on the matter would be hugely beneficial.

Adriana: Thank you very much, Bruce. Are there any final things you’d like to add?

Bruce: The work being done to develop relationships between all of the partner agencies who have an interest, or are affected by wildfire is really important. We need to understand everyone’s perspective, identify common themes and agendas and build on the areas of similarity and overlap rather than focussing on where our views or needs differ.

It is only by working together to understand, prevent and respond to wildfire that Scotland will truly reduce the threat posed by wildfires

Research and good quality information allows us to target our messaging and education effectively and efficiently and helps us to focus on what action can be taken to better prevent and respond to wildfires together rather than as individual groups. It is only by working together to understand, prevent and respond to wildfire that Scotland will truly reduce the threat posed by wildfires.