Wildfires as a Shared Arctic Variable 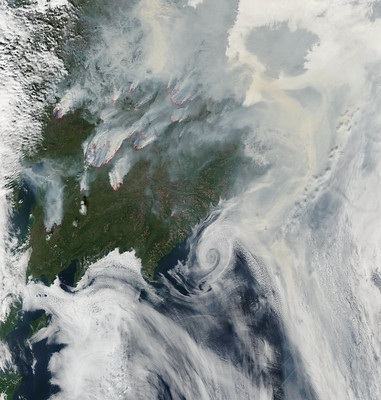 In 2021, another grim milestone for climate change was reported – smoke from wildfires had reached the North Pole. Whilst it can’t yet be definitively determined if it was a historic first, it was nevertheless symbolic of the pressing issue of wildfires in the Arctic.

The significance of Arctic fires is reflected through an increase in research and initiatives aiming to better understand and respond to them. One such initiative is the proposal for wildfires to be adopted as a Shared Arctic Variable, a concept which emerged from the Arctic Observing Summit 2020 and developed by SAON (Sustaining Arctic Observing Networks).

A Shared Arctic Variable (SAV) is a set of observables that should be able to help deal with a phenomenon of the Arctic environment which is of importance for Arctic inhabitants on a local or regional scale, and which typically is linked to the status of the Arctic climate system. Examples include permafrost (living on frozen ground), sea ice, and indeed wildfires. The idea behind adopting an SAV is to better connect natural and social sciences, guiding coordinated observations on the phenomenon including knowledge from Indigenous and local experts, science and governance. It should be done in such a way as to provide data and information products which are responsive to the information needs of the local and Indigenous Arctic Peoples, and tailored to empower them to better handle related problems

Wildfires have been proposed as one of the first.

Fire is a natural part of Arctic ecosystems, occurring both in boreal forests, often as flaming fires, and in tundra or permafrost, in the form of smouldering or ‘zombie’ fires (Fig. 1). These smouldering fires occur through the slow and flameless burning of peat underground, often existing for months, and notoriously difficult to detect and suppress. 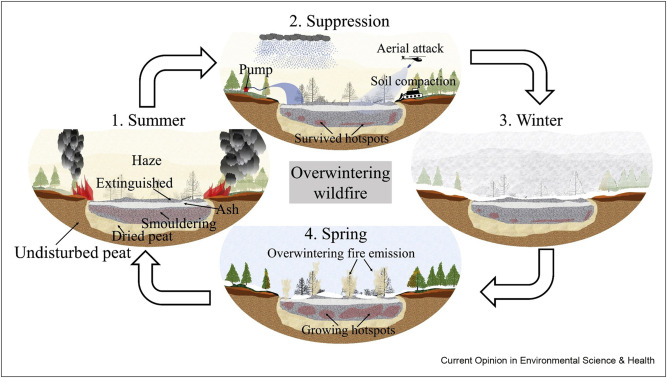 Figure 1. The four staged of an overwintering wildfire caused by smouldering combustion of histosols (soil of primarily organic material) in the Arctic (by Santoso 2021, CC-BY).

As well as natural fires caused by lightning, Arctic fires are often started accidentally by people, for example through timber and energy extraction activities and tourism, such as campfires going rogue. Indigenous communities in the Arctic also use cultural burning, or prescribed fires, as part of land management practices.

As climate changes, so too are Arctic fire regimes – we are seeing longer fires seasons, with increasing likelihood of extreme fire weather, and more frequent and more intense fires.

Changes associated with global warming, such as agriculture expanding north, and boreal-tundra transitioning to dry peat, are predicted to increase fire risk. Increased lightning activity, which combined with drier more flammable fuels, is also leading to more wildfire ignitions. A recent study looking at boreal forests in Alaska and Northwest Territories of Canada, predicted that per 1◦C warming, there may be a 39%–65% increase in lightning-caused fire occurrence.

Why are they important?

There are several reasons why Arctic fire behaviour under the pressure of climate change is important. On a large scale, particularly worrying is the risk of climate feedback loops. Wildfires, particularly the smouldering peat fires typical in the Arctic, emit extensive amounts of carbon (and peat fires release up to 100 times more carbon per burn area than non-peat fires). In 2020, it was estimated that wildfires in Arctic Siberia emitted a total of 58 million tonnes of carbon, a record value since records began in 2003.

These emissions could accelerate climate change, and thus the frequency and severity of wildfires, forming a feedback loop. Added to this, due to the albedo effect, if black carbon contained in the smoke is deposited on snow or ice, the darker surface can make it more likely to absorb solar radiation. This can accelerate permafrost thaw, which can increase fire risk further.

Climate feedback is not the only problem with Arctic fires. They can also have considerable, and sometimes devastating, impacts on Arctic communities. Wildfire smoke is a risk factor for respiratory and cardiovascular illnesses. In 2021 in Yakutia, Siberia, PM2.5 levels (small particles which can enter the bloodstream and damage organs) were recorded at 395 micrograms, in the “airpocalypse” category meaning “immediate and heavy effects on everybody.”

Other fire impacts include potential for increased risk of vector-borne diseases due to changing habitats, pollution from altered landscape topography, and the mental health impacts, especially when there has been loss of life, livelihoods and property, and even climate-led migration (Fig. 2). 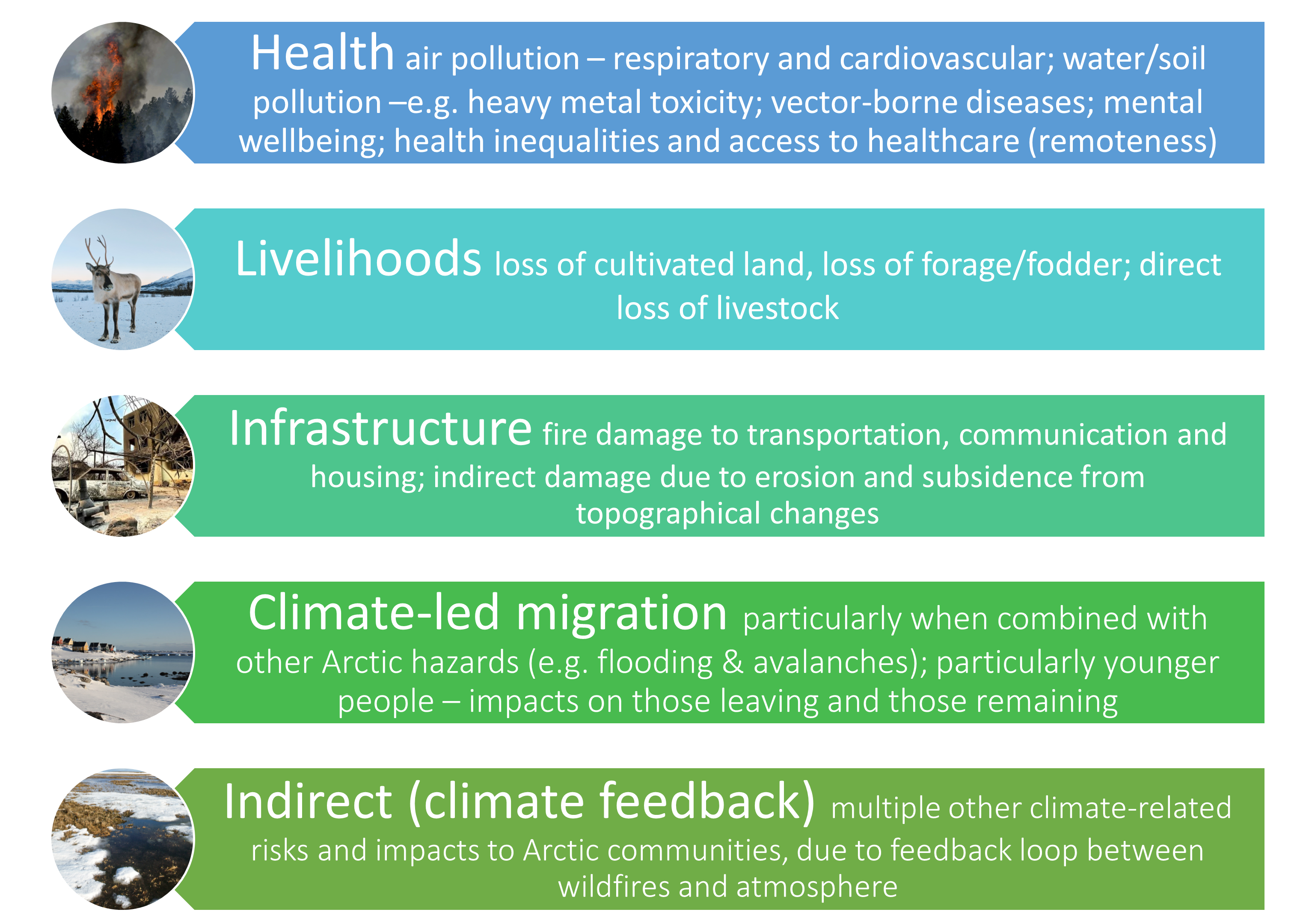 An effective response to Arctic fires demands good data – reliable, relevant, extensive and timely; and good data in the Arctic requires a coordinated, collaborative and cross-sector approach to observations. It requires efficiency in resource-use, and shared, high-quality infrastructure and technology. Good data also need to be transformed into clear information for the users’ needs, serving professionals and decision-makers, as well as individual citizens. However, in terms of conventional observing systems, the Arctic, with its challenging climatic and logistical characteristics, is one of the most poorly observed regions on Earth.

This is where SAON and Shared Arctic Variables come in. SAON was created to improve coordination in Arctic observations, in an integrated and equitable way – and they developed a vision for doing so – A Roadmap for Arctic Observing and Data Systems (ROADS).

SAVs are a core component of ROADS. The concept builds upon an existing global observational system –  Essential Variables. These are variables considered critical for observing and monitoring Earth systems, whether that’s in climatology, oceanography, biodiversity studies, geodiversity or agriculture. For example in oceans, Essential Variables include sea surface temperature, oxygen content, and phytoplankton biomass and diversity. Sustained, accurate measurements across an agreed set of variables over time provides a vital way to assess how the Earth’s systems are changing, which helps inform how to respond.

What SAVs offer in the Arctic, beyond global Essential Variables, is their specific goal to address the observing needs of Arctic Indigenous peoples and Arctic communities (see Fig. 3). They are “shared” in the sense that they are co-defined and take into account global, regional, indigenous and local voices and interests. ROADS outlines the processes for identifying and implementing SAVs, an important part of which is the formation of Expert Panels, involving Indigenous and local, as well as regional and international, experts. 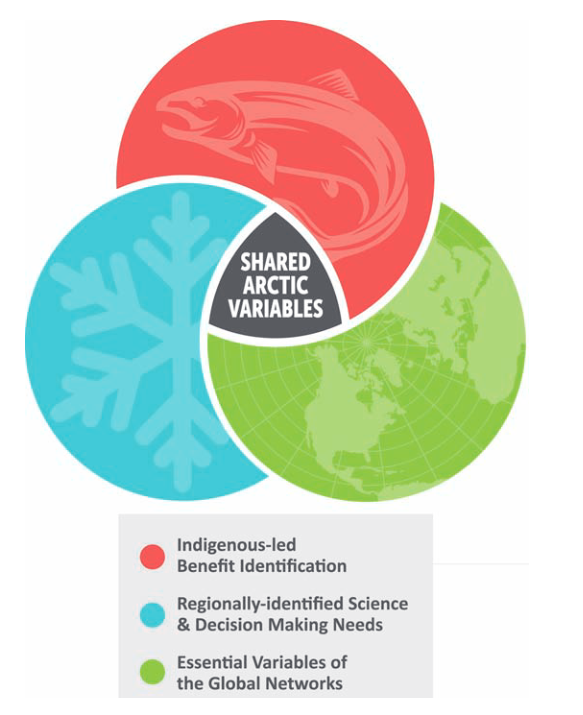 The adoption of Wildfires as an SAV is still in the early stages. Along with two other SAVs – permafrost and sea ice – the process is being coordinated, in collaboration with SAON, by the Arctic PASSION project, whose goal is the co-creation and implementation of a coherent, integrated Arctic observing system: the ‘Pan-Arctic Observing System of Systems’. Arctic PASSION will demonstrate how ROADS, and SAVs, can be put into action.

In September 2022, the first expert panel meeting on the Wildfire SAVs took place in Sodankylä, Finland, involving experts with diverse backgrounds (e.g. a reindeer herder, fire chief and a space advisor, among others),  discussing key issues around wildfires, such as where they occur and factors affecting fuel and ignition, and so forth.  Requiring trust, dialogue and common language, these panels are the beginning of the SAV adoption process.

The road to adoption and implementation of SAVs is new, but there are clear benefits of the approach. Wildfires as one of the first SAVs will pave the way for coordinated and relevant observations which can be used in local and regional decision-making in relation to Arctic fires, that will be beneficial for Arctic communities, whilst also being valuable for global networks. We will know more, and respond better, to Arctic fires in the future.

Dr Adriana Ford is the Centre Manager, based at both Imperial College London and King’s College London. The article is borne from involvement in a session on Wildfires as a SAV, organised by Arctic Passion, which was held at the Arctic Circle Assembly 2022 in Reykjavik, Iceland, October 15th 2022.

At the time of writing (October 2022) Arctic PASSION are calling for further Indigenous experts to co-create the Expert panel and lead on the work on wildfires. Please contact arctic-passion-coord@listserv.dfn.de