The Fastest and Most Complex Wildfire Spread Pathway: Firebrand Spotting 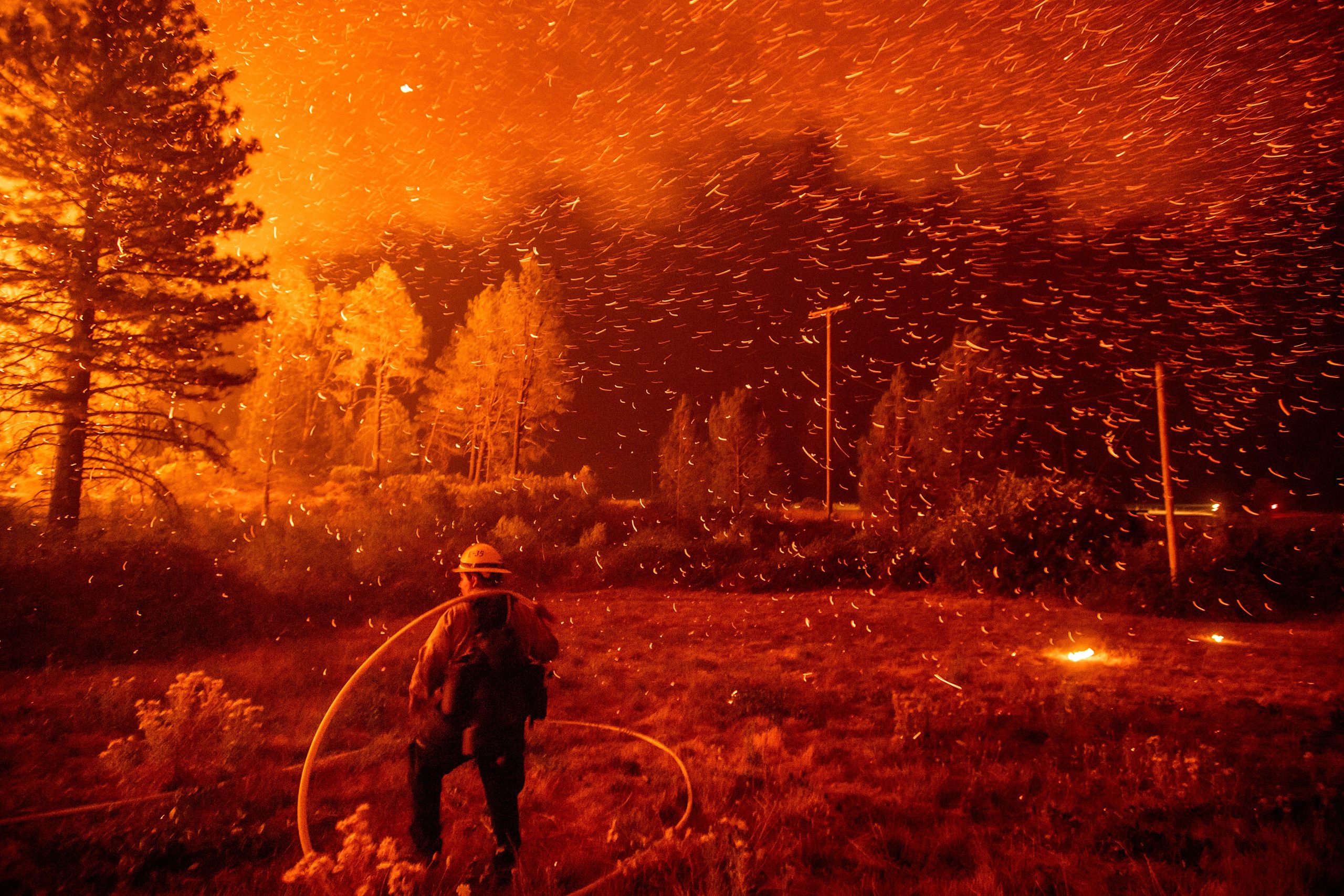 Photo:  Firebrand shower during the 2018 Delta Fire in the Shasta-Trinity National Forest, California, USA. Photo courtesy of Noah Berger/Associated Press (noahbergerphoto.com). Photo shows numerous airborne firebrands and flames on the grass appear to be ignited by the landing firebrands

Fires can generate particles of burning fuel. The type of fuel, flames, and surrounding conditions impact these particles’ size, shape, and burning conditions. Embers more generally describe small and hot carbon-based fuel particles; firebrands specifically describe airborne burning particles, which travel through wind-driven transport. As shown in the photo above of the Delta Fire in California, wildfires can produce large numbers of firebrands. When firebrands finally land, they may ignite new fires, called spot fires. This wildfire spread process is called ‘spotting,’ and it is a challenging and complex wildfire risk.

Studies have shown for years that firebrands are responsible for high rates of fire spread (Koo et.al cites notable firebrand spotting distances of several kilometres in the 1991 Oakland Hills Fire, and of over 10 kilometres in the 1871 Peshtigo Fire probably lofted by large firewhirls). Post-wildfire damage inspections often characterise firebrands as the leading cause of building ignition and damage. Firebrands can directly ignite objects by accumulating on them directly, or indirectly by igniting nearby flammable fuels which then create a fire that spreads via flame radiation and flame contact.

Firebrand ignition of spot fires includes numerous sub-processes occurring at varied spatial scales. These processes and parameters range from the single firebrand particle, its physical properties and burning dynamics, through its interaction with surrounding wind profiles and environmental conditions, to the ignition of far away spot fires in vegetative or urban areas. Specifically, firebrands are first generated by flaming fuel, then transported in the wind, and lastly land of target fuel, possibly igniting it; these processes are illustrated in the figure below, adapted from Fernandez-Pello, 2017. In this article, we introduce these three processes, and briefly discuss the impact of firebrands in wildfire safety. 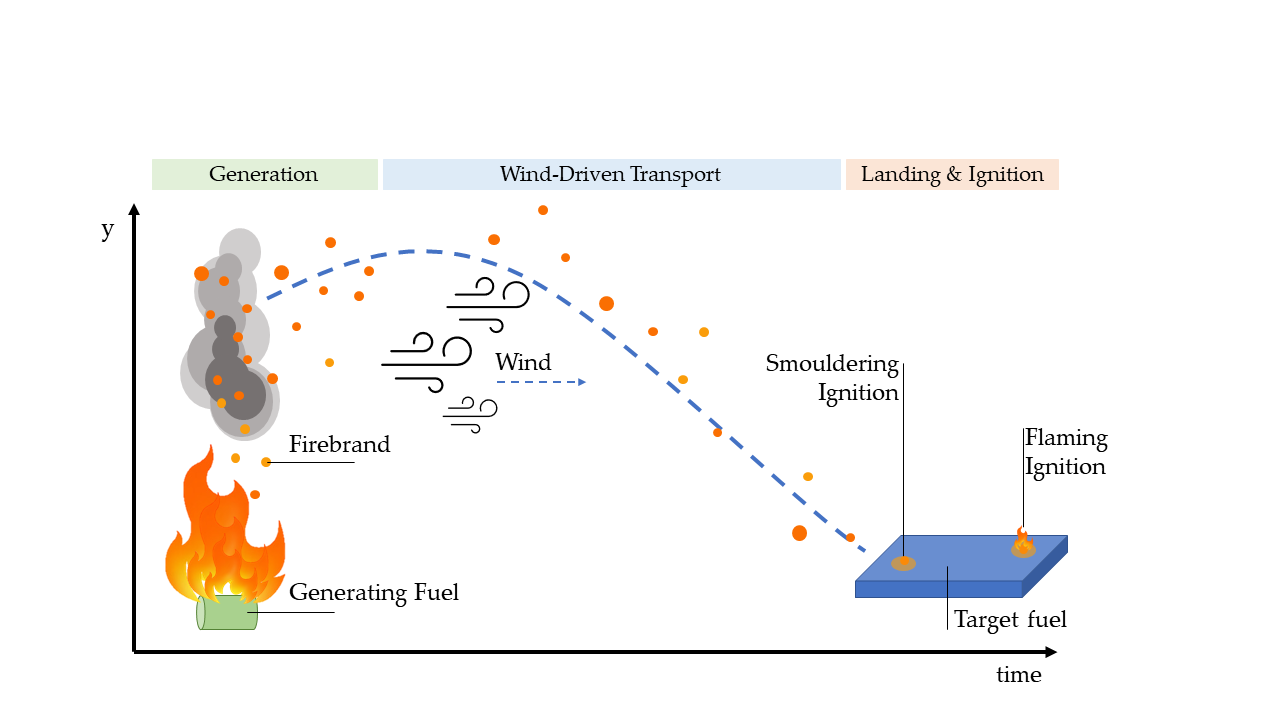 Figure: Illustration of the three main processes which occur during a wildfire firebrand lifetime:1) Firebrand Generation due to lofting caused by the fire plume, 2) Wind-driven transport of the firebrands caused from the surrounding wind profile, and 3) Landing of the firebrand on a generic target fuel and possible subsequent ignition. Illustration from (Fernandez-Pello, 2017).

Firebrands can be generated from a variety of fuels, including both vegetative and urban fuel. Extensive research has been produced characterising firebrand generation from specific fuels, such as Douglas-fir trees, and full scale burning buildings. As the fuel burns and its structure degrades, smaller fuel particles are generated. The particles vary in size and in shape, firebrands are most commonly modelled as having cylindrical, spherical or disc shape). Once created, these fuel particles are lofted upward by the fire gases in the plume. The vertical wind speed of the plume impacts the firebrand’s initial size, and in turn affects the length of its lifetime. For a firebrand to be able to ignite spot fires, the particle must get heated to ignition temperature once generated.

Once the firebrand lands on the target fuel, the condition of the firebrand, the target fuel, and the surrounding conditions all impact whether the fuel will be ignited and what type of ignition will occur. The firebrand needs to still be burning hot enough to ignite the fuel. The amount of heat necessary to ignite this target fuel will depend on the material of the fuel, its physical and chemical conditions, as well as the surrounding environmental conditions. The large number of interacting variables involved in the ignition processes make characterising critical ignition conditions challenging. The creation of the NIST Dragon, an experimental apparatus, which allows the controlled supply of firebrands, has enabled researchers to conduct experiments of firebrand exposure to various target fuels in various size scales. Especially since this invention, there have been a number of published results on firebrand ignition of various fuel beds, and specific vulnerable building features.

Although research has dramatically increased understanding of firebrand behaviour in numerous scenarios, there are still many questions to answer. Better understanding of firebrand ignition is crucial in predicting wildfire spread and building safer communities. As a PhD student researching wildfire damage to rural buildings in Southern Europe, firebrands are a key risk to consider. I am currently creating computational models investigating firebrands accumulation patters under varying conditions. Hopefully this brief overview of the complex mechanisms and factors involved in the firebrand spotting process provides unfamiliar audiences with a clearer understanding of what firebrands are, and how they contribute to wildfire spread and damage. The short video I have produced below, also summarises these processes.