Landscape fires estimated to cause over 600 thousand premature deaths each year, many in children under five 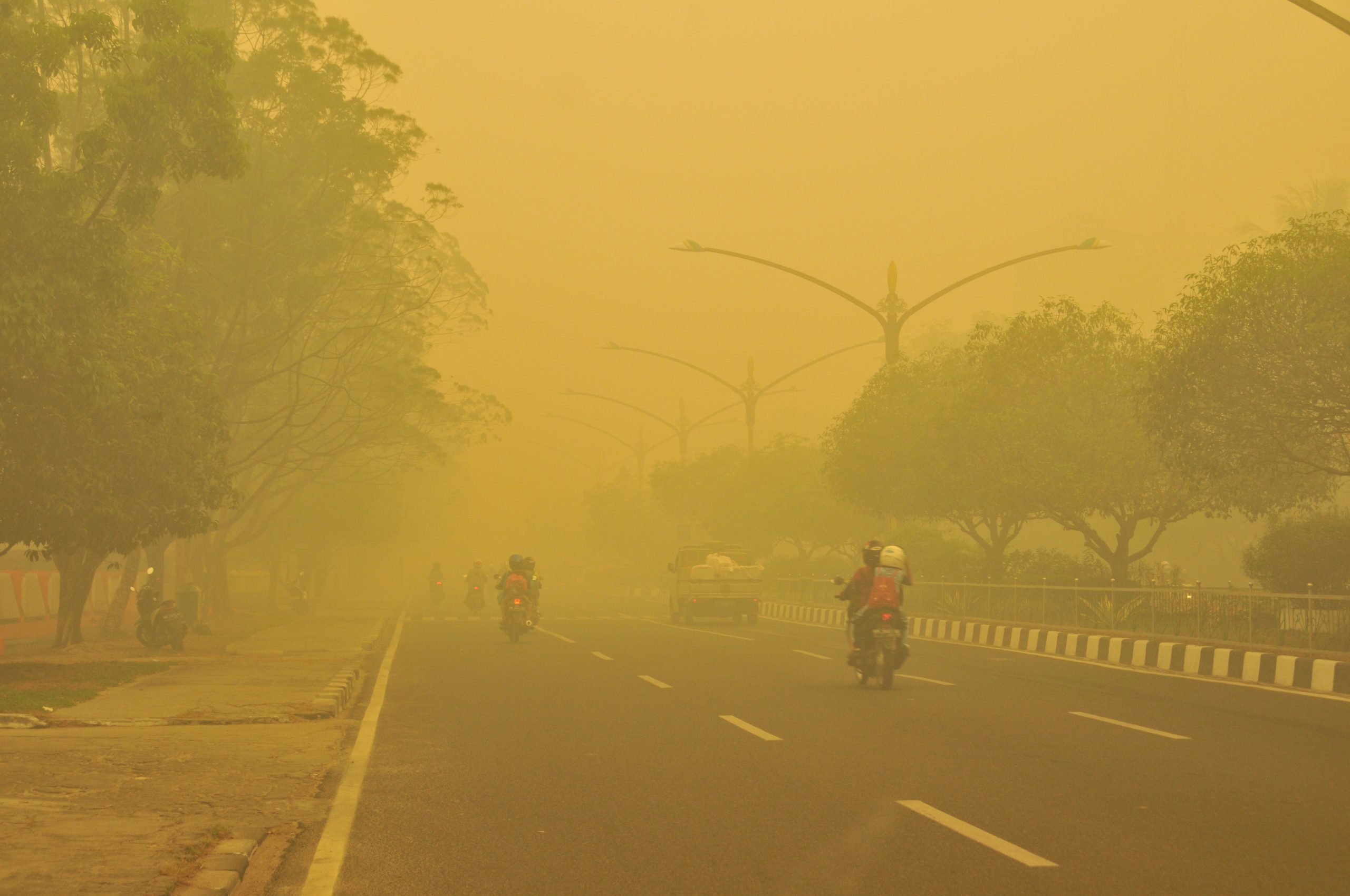 Photo: Smoke from surrounding peatland fires often pollutes the air in the city of Palangkarya (Kalimantan, Indonesia) – home to around 250,000 people.  During these events. levels of airborne fine particulate matter (PM2.5) reach many times those considered extremely hazardous to health.

Ambient (outdoor) air pollution is the world’s greatest environmental health risk, and a growing one in many parts of the world. The respiratory and cardiovascular problems related to ambient air pollution exposure are estimated by the World Health Organisation (WHO) to cause many millions of premature deaths each year, and in 2016 it was estimated that 91% of the world’s population was living in places that exceed healthy air quality guidelines (WHO 2018).

The problem is particularly acute in many developing nations, where dependency on coal, rapid urbanisation and limited emissions regulations has led to some of the worst air pollution levels in recent times. Landscape fires are a further source of ambient air pollution common to these regions. In certain biomes, landscape fires are a natural and ecologically valuable phenomena, but they can also be associated with less positive actions. For example, large scale tropical deforestation often involves extensive use of fire, fires can become widespread in tropical peatlands previously drained for agriculture, and setting light to agricultural ‘waste’ such as rice straw is commonly used to clear fields of unwanted materials after harvest.

A study, just published in Atmospheric Environment, has provided a new quantification of  the health impact of landscape fires burning across the globe, based on data from a state-of-the-art global atmospheric composition modelling and monitoring system driven in part by satellite remote sensing. The authors used outputs from the Copernicus Atmospheric Monitoring Service (CAMS) to map surface-level ambient atmosphere PM2.5 concentrations in different countries.  They then quantified the contribution that landscape fires make to this, and combined these data with population information and mathematical ‘dose-response’ functions to estimate the number of early deaths resulting annually from breathing air contaminated with PM2.5 from landscape fires.

Results showed that ambient atmosphere PM2.5 concentrations exceed the WHO guideline (annual average of 10 µg.m-3) in 143 countries, with 67.2 million people annually exposed to levels classed as ‘hazardous’ (> 250.5 µg.m-3). In Laos, Democratic Republic of Congo and Sierra Leone, the WHO safe concentration guideline was exceeded due to PM2.5 coming from landscape fires alone. Globally, the analysis estimated that landscape fires alone result in 44 million people annually exposed to air quality considered unhealthy, with 4 million exposed to levels considered hazardous to health. Landscape fire smoke exposure was estimated to cause over 650 thousand premature deaths each year, equivalent to 8-21% of worldwide premature deaths related by ambient air pollution annually.  Almost 40% of premature deaths were estimated to be in children under five, and with the vast majority in developing nations. The study re-enforces calls for less damaging use of fire in activities such as agricultural waste management, as well as the health co-benefits that would accrue from carbon emissions reduction strategies such as the UN Reduced Emissions from Deforestation and Forest Degradation (REDD+) initiative. 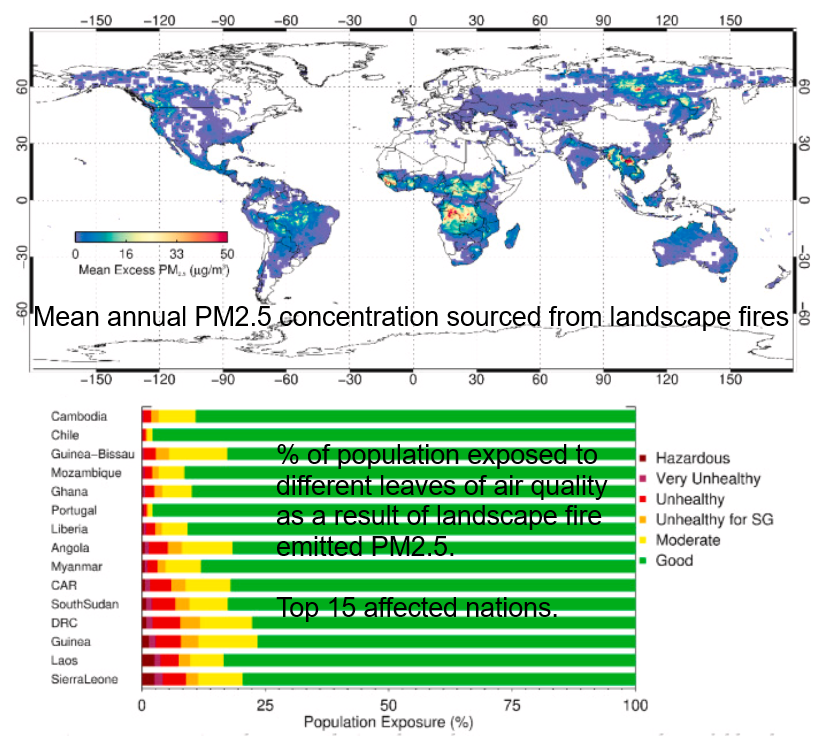 Figure: The effect of landscape fire on concentrations of airborne fine particulate matter (PM2.5) and the resulting proportion of the populations of the most affected nations that experience levels of harmful air quality as a result.

Co-author of the study Prof Martin Wooster, Associate Director of the Leverhulme Centre for Wildfire, Environment and Society & NERC National Centre for Earth Observation, in the Department of Geography at King’s College London, explains the significance of their research,  ‘Wildfires are a natural phenomenon of often great ecological value, but in certain areas fire is used excessively to clear and manage land, and this can lead to real air quality problems. Our study confirms that the number of people dying annually from the effects of breathing air polluted by smoke from landscape fires is many, many thousands of times the number who die in the fires themselves. We hope that this type of information can help accelerate action to reduce this often-unnecessary source of air pollution, for example through reductions in burning of tropical peatlands and forests and the use of more appropriate methods and technologies to manage agricultural waste at very large scales”. 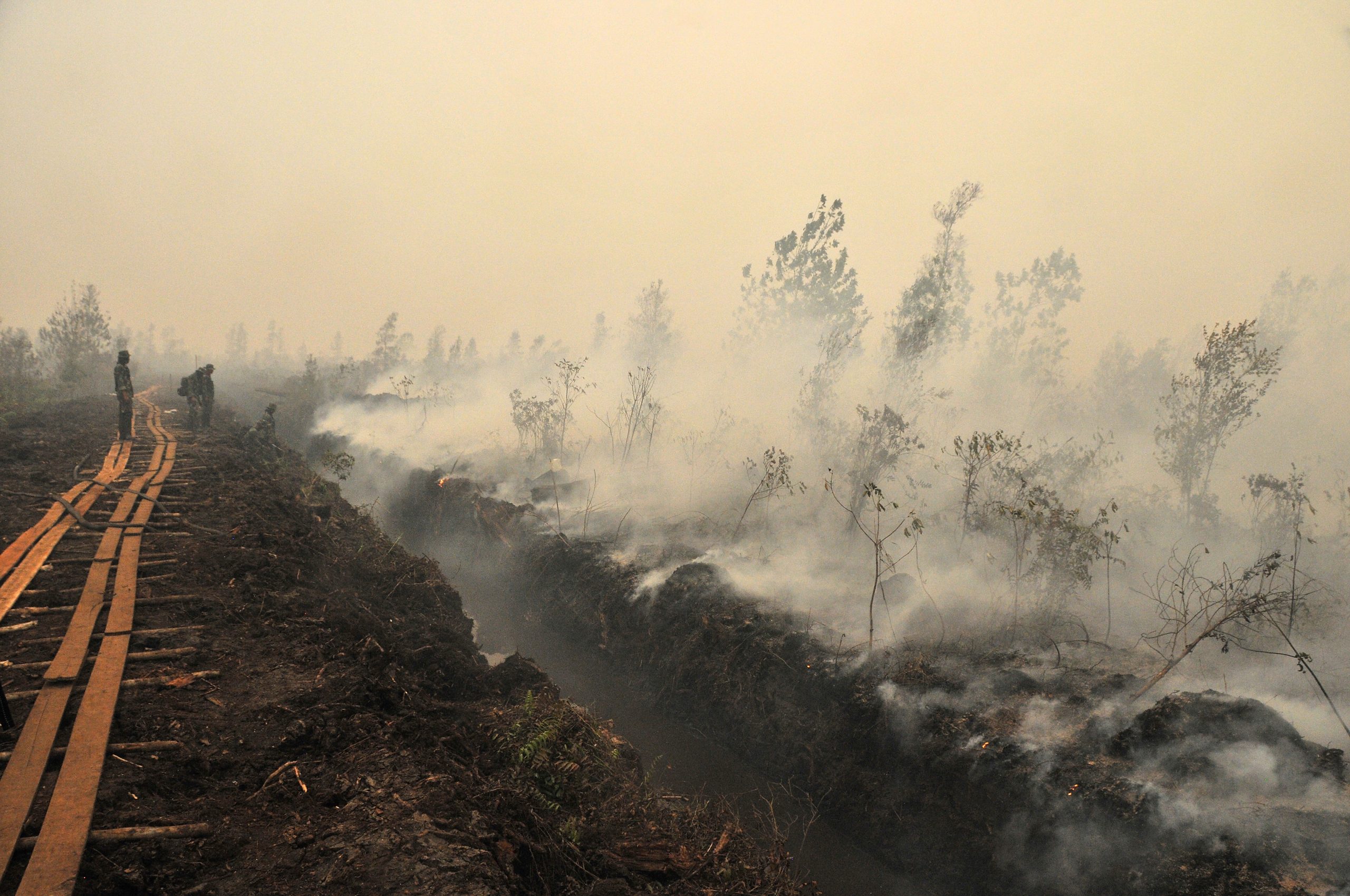 Learn more about the work of the King’s Earth Observation and Wildfires Research Group at wildfire.geog.kcl.ac.uk