Furthering our understanding of the global patterns of burnt area, fire size and fire intensity 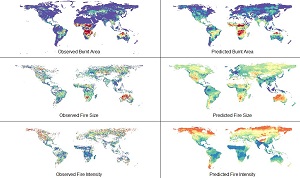 By Olivia Haas and Natalie Sanders

Wildfires are a fundamental ecological process but studying wildfire patterns and properties at a global scale is challenging. However, understanding wildfire processes is essential to fully describe global vegetation distribution and structure. In addition to temperature and precipitation, vegetation can both influence and be influenced by wildfire regimes.

A given fire regime influences long-term vegetation distribution and traits, and in turn, these traits enable the persistence of that same fire regime. For example, trees exposed to high intensity burns develop thick bark, whereas grasses and shrubs exposed to frequent burning have developed resprouting capabilities after fire. Despite the crucial importance of wildfire regimes, very little is known about the global controls of different wildfire properties.

Current global vegetation models include wildfire modules, derived from global wildfire models. However, these wildfire models struggle to capture more that the broadest geographical patterns and is it unclear how well they respond to changing conditions. If we want to understand how global vegetation will respond to change, we must understand how their controls will change, including wildfires. As such, there is a pressing need to increase our understanding of what governs fire regimes globally. This was addressed in the recent paper led by PhD student Olivia Haas of Imperial College London:

Using a statistical approach, this study aimed to explore the key controls of three fire properties: burnt area, fire size and fire intensity. The aim was to develop three independent models for each of these properties, starting from a common set of sixteen predictors, and proceeding by elimination to retain only the strongest predictors for each of the models. The predictors represented four key properties: vegetation load and type, landscape fragmentation, climate, and ignition sources.

Obtaining the empirical data for all three of these fire properties proved challenging, especially in the case of fire intensity. Both burnt area and fire size have available datasets at a global scale, however, there is no global dataset capturing fire intensity. As such, the team developed an approximation metric, by dividing fire radiative power, a measure of the amount of energy released, by the square root of fire size, an approximation of the fire line. 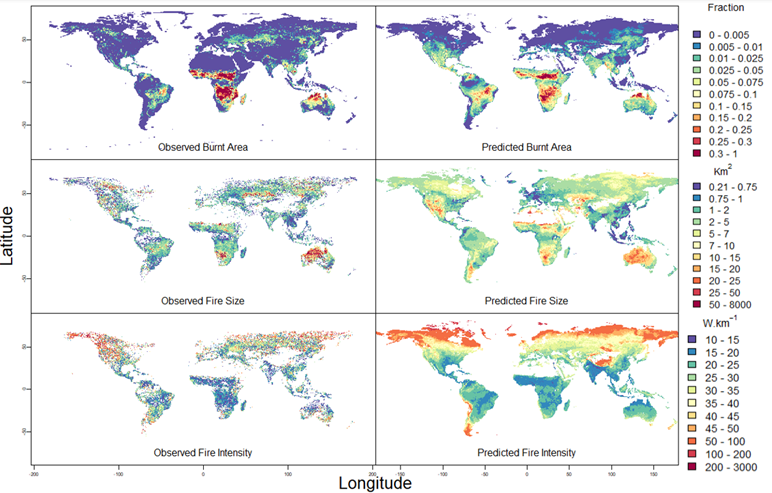 The analysis found that all three of the fire properties were driven by different properties in the underlying fuel. 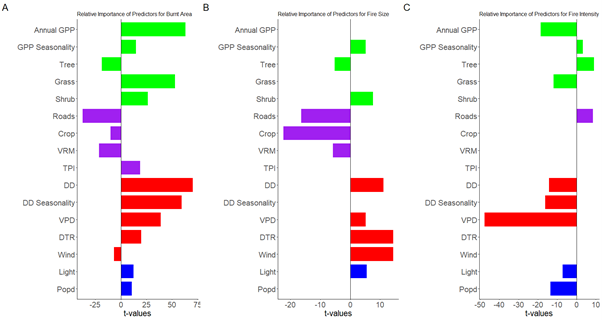 Another interesting finding of this study was that, overall, ignitions did not have strong explanatory power. In the case of burnt area and fire size, they represented the group of predictors with the lowest relative importance. In the case of fire intensity, they had a slightly stronger effect, though it was an opposing effect to the other two models. Indeed, ignitions limited fire intensity. This negative relationship can be explained by the fact that frequent burning does not allow for large enough fuel loads to sustain intense fires. Within global wildfire modelling, ignitions parameters are often included, however, these models fail to adequately represent fire starts.

This analysis suggest that ignitions may not actually be limiting on a global scale. On the other hand, it appears that explicitly representing landscape fragmentation greatly improved the models, especially fire size, suggesting that global wildfire models should instead focus on explicitly including fragmentation.

These results add to a growing body of literature informing the global wildfire modelling community on the importance of considering the controls of separate wildfire properties independently and highlighting the importance of underlying fuel properties in determining fire regimes. This is still something that global wildfire models fail to capture adequately. This paper highlights key areas for improvement within existing models to help understand wildfire regimes on vegetation distribution and structure.

You can read the full paper here: 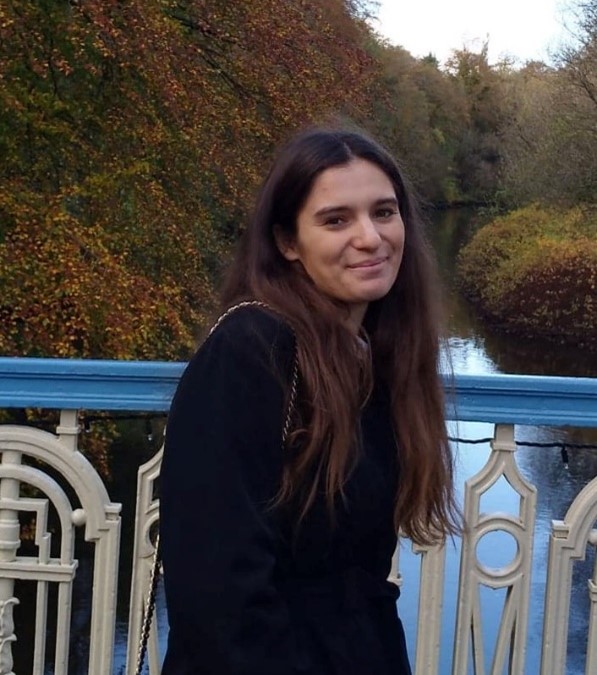 Olivia Haas is a PhD student in the Life Sciences Department at Imperial College, part of the latest QMEE (Quantitative Methods in Ecology and Evolution) cohort and a member of the Leverhulme Centre for Wildfires, Environment and Society. Her primary interest is exploring the impact of CO2 on fire regimes and ecosystems in rapid warming events. As part of her PhD, she is working towards building a global fire model that, coupled with a dynamic global vegetation model would allow for improved simulations and predictions of the effect of increasing atmospheric CO2 on the global fire regime and associated impacts on ecosystems. Notably, she is interested in exploring the potential for ecosystem shifts driven by fire disturbances.

This paper was a collaborative project with funding from QMEE, REALM, the Leverhulme Centre for Wildfires, Environment and Society and LEMONTREE (Land Ecosystem Models based on New Theory, obseRvations and ExperimEnts project, funded through the generosity of Eric and Wendy Schmidt by recommendation of the Schmidt Futures