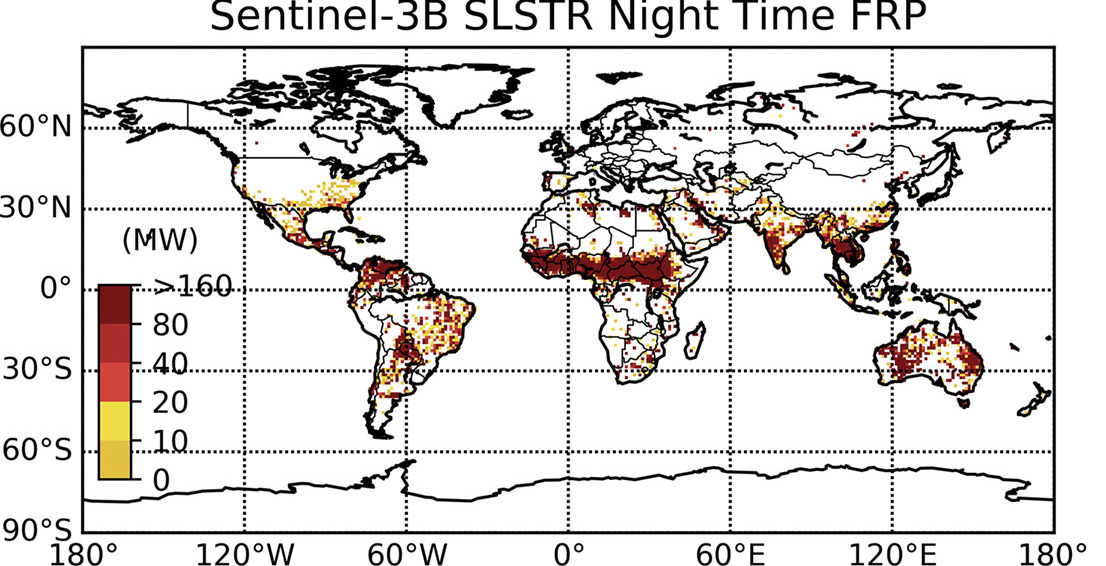 Image: Sentinel-3B SLSTR Night Time FRP – Data on active fires from the European SLSTR instrument now joins that from the US MODIS instrument in providing daily mapping of the strength if fires worldwide. The image shows the extent of fires detected in a single month.

Satellite Earth observation (EO) of landscape burning is a critical tool in wildfire research and essential for the global monitoring of where, when and how much vegetation and organic soil fires are burning – for example to support air quality forecasting in fire affected regions. Whilst fires may seem remote from us, they actually burn across millions of square kilometres of the Earth every year and release huge amounts of greenhouse gases and air pollutants into the atmosphere. Satellites provide detailed information on these processes across the entire planet – including in remote areas hard to observe in other ways. They provide data on the location, timing and strength of fires whilst they are still burning, the composition and characteristics of the smoke, and the amount of area that has been burned.  All this vital information supports many types of environmental science, global monitoring of the Earth system, and decision making in relation to land and fire.

The European Space Agency, on behalf of the European Copernicus programme, has been developing a series of next-generation Earth observation missions. These Sentinel satellites and their specialised instruments support scientists, agencies and the general public in better understanding changes in our atmosphere, ocean and land environments. One of the new instruments –  the Sea and Land Surface Temperature Radiometer (SLSTR) onboard the Sentinel-3 satellites –  is now starting to be used to provide global fire monitoring.

A new study published in Remote Sensing of Environment by King’s Earth Observation and Wildfire Research Group, the National Centre for Earth Observation (NCEO), and the Leverhulme Centre for Wildfires, Environment and Society, all based at King’s College London, presents a new algorithm that is forming the basis of operational Sentinel-3 data processing chains being run by the European Space Agency and The European Organisation for the Exploitation of Meteorological Satellites (EUMETSAT).

Dr Weidong Xu, Professor Martin Wooster and colleagues at King’s developed the algorithm, and collaborated with ESA, EUMETAT and private industry to deliver and test versions that run in the ground segment of the Sentinel-3 satellite. These operational processing chains will exploit all the SLSTR data collected by two Sentinel-3 satellites globally every day, mapping the location and strength of fires burning as the satellites pass overhead. The ‘fire radiative power’ (FRP) measurements that the SLSTR provides for each fire are directly proportional to how much carbon, vegetation and organic soil the fires are consuming and how much smoke they are putting into the atmosphere. At the moment it is mostly night time data that are being processed, but daytime processing will hopefully start next year following some additional development work.

Dr Weidong Xu, who is lead author of the study, explains the significance of SLSTR, “SLSTR is the new sensor onboard the European polar orbiting sentinel-3A and sentinel-3B satellites. Its observations are expected ultimately to become the main global source of active fire information for the mid-morning and evening timeslots – data currently supplied by MODIS onboard NASA’s Terra satellite. With MODIS Terra due to retire in a few years, SLSTR fire information will be vital for continuous global fire activities study for next 20 years.”

The results of this research are free to access by anyone, and are likely to be very widely used. The active fire products from MODIS, the instrument on NASA’s Terra satellite, are one of the most widely used MODIS products worldwide, both by scientists and people working to manage fire and their air quality impacts. The MODIS instrument has now been operating for 20 years mapping fire every day globally, despite it being designed for only eight years of operation. The Sentinel-3 fire products will ultimately take over from those of Terra MODIS,  enabling this unique long-term fire record to be extended into the future to study how fire is responding to changes in human activity and climate.

Prof Martin Wooster who leads the group research at King’s, and who is an Associate Director of the Leverhulme Centre for Wildfires, Environment and Society, added, “It has been really rewarding to turn our science into a real operational capability leveraging off Europe’s huge investment in the Sentinel satellites. Seeing the data coming in on fires burning around the world shows that these systems can really contribute to continuing the work started by NASA in the global observation and monitoring of fires using MODIS. Sentinel-3 will continue this capability for the next decade and more.”

Two versions of the operational Sentintel-3 FRP products are available from ESA (soon) and right now from EUMETSAT.